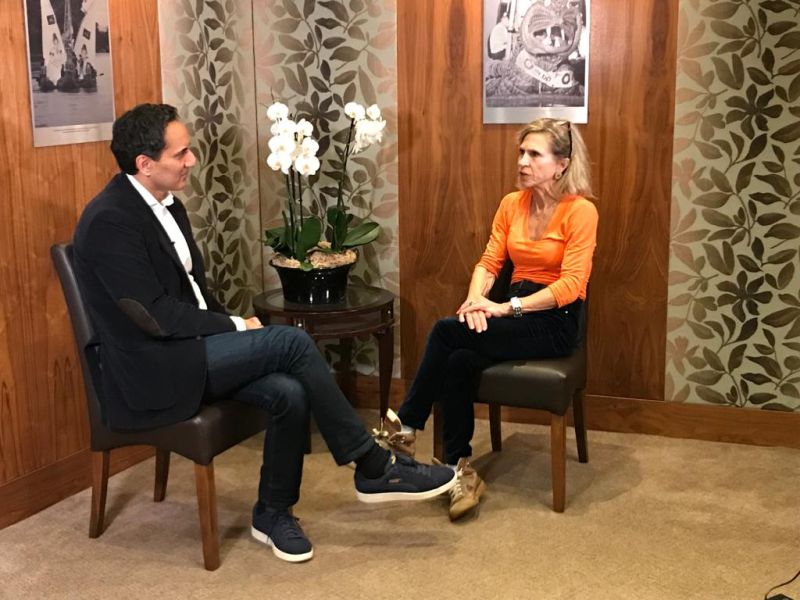 Stancer speaks with Cervest’s Founder and CEO Iggy Bassi in her first expedition discussion since her return.

On August 15, 2021, polar athlete and explorer Rosie Stancer and her long-time polar teammate Pom Oliver started their historic expedition across the Aral Kum. The 600km trek marks the first full crossing on foot of the world’s youngest desert. Located in Eastern Central Asia, the Aral Kum was, not so long ago, an abundant sea fed by two rivers, the Amu Darya, and the Syr Darya. The desert emerged in the 1960s as the rivers were diverted to grow crops. Today, only 10% of the Aral Sea remains.

Through their “non-judgemental expedition” in the lead up to COP26, Rosie and Pom sought to raise understanding of the issues surrounding the desert's creation and to observe ongoing remediation measures.

Cervest Founder and CEO Iggy Bassi sat down with Rosie to discuss the expedition, her thoughts about the climate implications of this man-made desert, and her hopes for COP26.

An expedition with an important environmental message

Iggy Bassi:
Why this expedition?

Rosie Stancer:
I thought it’d be interesting to do an expedition over the world's newest desert. It was once the Aral Sea. A bountiful sea, and it has only recently become a desert, by the hand of man.

It was possibly one of the most interesting and, I think, worthwhile expeditions I have yet undertaken. My expeditions have been more about the Daring Do of polar endeavors. But this one carried with it a particularly weighty and important environmental message, and it needed to be done. And I felt it had a great purpose to it.

To build a resilient future for our planet, we need to safeguard our natural assets

Iggy Bassi:
What happened to the Aral Sea?

Rosie Stancer:
Effectively, it became a desert. It left people in communities bereft of their livelihoods. The climate became a desert climate, which meant that without the water being able to reflect the sun and keep the area slightly cooler, the summers became excruciatingly hot — 50 degrees plus. And the winters are extremely cold, with frequent, tremendous dust storms, which are highly toxic.

Iggy Bassi:
What are the plans for the local governments to think about adaptation? Is there any hope for the Aral Kum/the Aral Sea?

Rosie Stancer:
There is! The highlight of the expedition was finding out that there was this note of optimism. The government has been taking action and the Kazakh government in particular has been very good. Shored up by the World Bank, it has built the Kok Aral dam which has been very successful and raised the levels of the water again in the northern part of the sea. The surrounding dry lands and wetlands are coming back to life. And this, I very much noticed with my teammate, Pom, by the time we reach the Kok Aral dam there's much more color all of a sudden — much more life, vegetation, and birds.

Iggy Bassi:
Wonderful. What are the broader implications for intensive farming and damming over the next couple of decades? This is a multi-jurisdictional area. Is anyone discussing governance mechanisms?

Rosie Stancer:
This is why the eyes of the world have turned on somewhere like the Aral to see if it can be redeemed, why did it go wrong in the first place, and what measures are being undertaken that are helping? Despite the fact that it was a man-made calamity, global climate warming also played its part. The glaciers up in Tajikistan, and Kyrgyzstan, were beginning to melt, and they affect the rivers that flow into the sea.

Iggy Bassi:
What would you like to see out of COP?

Rosie Stancer:
I'd like to see a sense of openness and global teamsmanship emerge, which is why it is such a shame that those countries who have decided not to be present, have made that decision.

Iggy Bassi:
Some sort of international collaboration agreements are fairly fundamental, particularly for smaller states. We can have the umbrella agreement, but they're notoriously difficult to negotiate. Are you hopeful that COP will make some grand claims or announcements that we don't know about yet?

Rosie Stancer:
I'm hoping that Kazakhstan is going to say they're making some progress, which will sharpen up the rest of the world. There's various protective establishments now being set up with some of the five main countries surrounding the Aral Sea, to fund and share the responsibility for bringing it back. And it is coming back, so it shows it works!

Iggy Bassi:
Large scale adaptation does require a significant amount of resources and co-governance of those large areas. Do you think that's feasible? When you think about climate volatility that's now locked into the system, we will increasingly see greater severity, greater frequency of very shock events. Is there a danger that collaboration won't work? Is there a danger that countries start looking inwards? Protecting their own?

Rosie Stancer:
Everyone has got to start looking outwards. And if I can draw a parallel to my own expeditions, when I began doing expeditions, it was all about looking inwardly at what I wanted to achieve and making a mark in history books. Whereas as time went by, and I became aware of the environmental changes, I began to look more outwards. So my exhibitions are no longer about me. They're more about the environment and message that comes with it.

Hopefully, people can conjure up this sense of team spirit at COP26 by saying we're all in it together. The only way we're going to get over this is collectively.

Iggy Bassi:
What are your biggest concerns for COP?

Rosie Stancer:
I would like the messages that come out of COP26 to be translated clearly, so that they're understandable by everybody, of whatever age and whatever walk of life, and imbued in that message is a sense of urgency. People have got to get a move on with this. And I would like to see that carried on down, the importance of that message right down to the individuals as well. And that, psychologically, it is every individual's responsibility for their own actions, to also adopt that long term view and think about every action they undertake, as well as at that higher level.

Iggy Bassi:
My biggest fear for COP is that there's just a failure of imagination to move forward. We've come out of a deep Covid crisis, and now there's great expectations on governments and companies to start thinking about how we make deeper commitments on climate.

The government won't bail out failed assets in the next 15-20 years. If your dam fails, your farm fails, your power plant fails or your assets get stranded by transition risk, the government will probably not bail you out. It's incumbent upon companies to start moving towards a climate economy faster by themselves. We have tools, we have technologies, we have an increasing pace of energy technology as well. So it's in their shareholders interest that these companies move faster if they want to survive the 21st century and be the champions within the climate economy.

“Don't wait for governments,” is my core message. Governments should try and set the right direction, but it could take them a long time.

Rosie Stancer:
Everybody has to embrace the theory of change.

Everything should be looked at with the end goal in mind, and work it backwards, rather than working it from the other way around and firefighting as we go. With all the technology that we have, and we're developing all the time, the problem is, that the situation keeps changing. And if we work it the other way around, everything becomes much more flexible, and adaptable, so that, like on an expedition, we can adapt and modify to each era or each change as it happens, but stay focused on the end goal which is the protection and repair of our planet. And by adapting this approach, it should also naturally and organically encourage discussion between different parties because it should ultimately work in everybody's interests.

Iggy Bassi:
This is why we are very keen for people to understand how the incentives are aligned at the very beginning of a project. So when we think about funders, for instance, project managers, or large scale project developers, their access to finance, they must model scenarios for climate risk for mitigation, adaptation, from the very beginning.

There's a huge movement now, between companies and governments setting net zero goals, it is absolutely what they need to do. But at the end of the day, net zero only makes sense mathematically if the whole planet can become net zero. We need to think about decisions and incentives across all types of economic activity, financing decisions, government to government interactions, and trade decisions.

Rosie Stancer:
Hopefully, this is what COP26 is going to encourage. Large corporations should be steering their own course, rather than waiting for the huge, great ships of government to alter their course, they should be moving ahead accelerating.

There needs to be an element of sobering and really, rather frightening, people to see the reality, counterbalancing it with a note of optimism as well that, Yes, we can do it!

For more information on Cervest's involvement with COP26, visit our COP26 page.